AUSTIN, Texas (August 22, 2022) – As football season quickly approaches, the Texas Lottery and the Dallas Cowboys are teaming up for a 14th straight year to launch a new version of the Cowboys scratch ticket game and promotional second- chance drawings. Representatives from both organizations introduced the newest version of the $5 game during a press conference at The Star in Frisco on Wednesday, Aug. 24. The latest Cowboys scratch ticket launched on Monday, Aug. 15 and is available at all Texas Lottery® retailers where scratch ticket games are sold.

“The Texas Lottery is thrilled to renew its partnership with the Jones family and the Dallas Cowboys organization by producing the 14th version of a Cowboys scratch ticket game, which has tremendously impacted public education in our state,” said Gary Grief, executive director of the Texas Lottery. “The sales from this game generate important funding while providing Texas Lottery scratch ticket players and Dallas Cowboys fans chances to win great cash prizes and unique second-chance prizes that feature once-in-a-lifetime opportunities.” 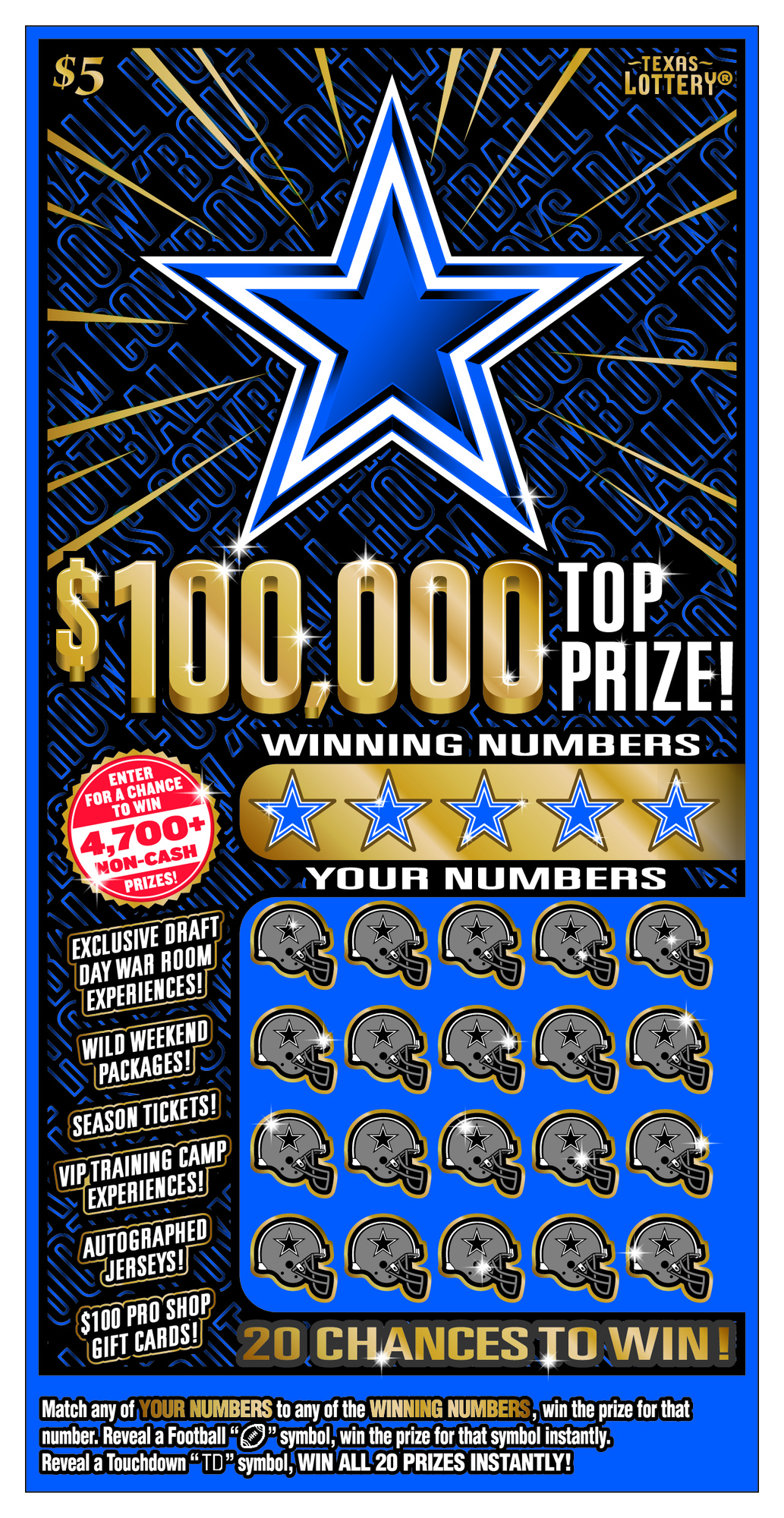 This year’s Cowboys scratch ticket offers more than $30.4 million in total cash prizes in the game, including four top prizes of $100,000 and more than 4,700 non-cash second-chance prizes. Overall odds of winning an instant-win cash prize are one in 3.79, including break-even prizes.

Since the first Cowboys scratch ticket game launched in 2009, the Cowboys-themed games have generated more than $434.7 million in sales, with an estimated $88.8 million of that total being transferred to the Foundation School Fund, which supports public education in Texas. During that time, $303.3 million in prizes from the game has been awarded to winners and $21.7 million in commissions have been transferred to retailers around the state.

“The partnership we have with Texas Lottery through our new co-branded Cowboys scratch ticket is so important to us both in continuing to support Texas education,” said Dallas Cowboys Owner, President, and General Manager Second-Chance Drawings Jerry Jones. “This endeavor also furthers our reach to our loyal Cowboys fans across the great state of Texas as it provides our fans with exclusive experiences, and that’s what makes this partnership truly special.”

Players can enter non-winning Cowboys scratch tickets into any of the five promotional second-chance drawings to be held throughout the run of the game for a chance to win experiential prizes, including a Dallas Cowboys Wild Weekend Suite package, Exclusive Draft Day War Room Experience, VIP Training Camp Experience, season tickets, autographed jersey, and Cowboys Pro Shop gift card. Before entering non-winning tickets into the drawings, Texas Lottery players must register or already be registered with the Texas Lottery Luck Zone.

About the Texas Lottery

$29.4 billion to the Foundation School Fund, which supports public education in Texas. As authorized by the Texas Legislature, certain Texas Lottery revenues benefit state programs including the Fund for Veterans’ Assistance. Since the first veterans’ themed scratch ticket game was launched in 2009, the Texas Lottery has contributed more than $189 million to programs supporting Texas veterans.